I used to work for an outdoor education program in Portland that brought every sixth grader in the county to the forest for a week. They came from everywhere; farms, cities, apartments, mansions. Every need, every language, every behavior. Some students came to us with higher needs and they usually had one-on-one aides with them. Some were volunteers, some were professionals who were with the children every day.

One week there was a boy who lives with autism. He was non-verbal and often wanted to stay in one place away from the group. He liked to dig in the soil and did that quite a lot. But the other thing he did was draw these pictures of TriMet buses.

I noticed this a few days in to the week and I asked his aide to set these pictures aside for me. I’ve kept them for over 8 years. I’ve kept a lot of art that students made, some with autism, some not.

There is so much to these pieces. If you know anything about Portland or TriMet, you quickly notice  that most of these are the backs of buses. This student and his mom rode the bus everywhere, but for him to notice the backs of the buses with this much detail means he was consistently watching them drive away from him.

He drew the ads on the back, which take up the rectangular lower half. He drew the lights, the triangle sign, the grating on the back, and the LED panel that indicates which bus is which. There are a few consistent lines too — 33 Fremont, 4 Division, 12 Sandy, 15 Belmont.

They aren’t all the same though. There’s a bike on this one—

This is just started—

All of them are beautiful—

They’re also mysterious. What was it about the bus that stuck in his mind?

I saw this student again a few years ago at a bus stop with his mom. They were sitting on the ground and she was knitting. I hope they just ride around to their appointments and that he still watches the buses drive away, making mental notes of the lights, the signs, and the ads. I hope it brings him peace to draw them.

I went to Lopez Island in the San Juans with a few of my closest friends. We got to stay in a family friend’s home for a full, unadulterated, child-free weekend. It was such a longshot that we all could take the weekend for ourselves, all together. We congratulated ourselves profusely for “doing the thing.” That’s an expression I use a lot to mean, like, sucking it up and doing the work. It’s completely relevant to our homeschooling life because if we didn’t do the thing, we would just stay home doing nothing and meeting no one.

We caravanned to Anacortes, stopped at dreamy food co-ops and made it to the ferry.

Then we drove down the tiniest, most beautiful roads flanked by firs, and up and down hills till we reached the house.

I researched it a little before, mostly to see if there were tide pools or rock art we could check out. There’s really not much of either. We hiked to the most beautiful places together. I announced that if I saw an orca I’d burst into tears. We saw a lot of seals, but no orca.

No one was an asshole, ever. These people are the most shining, glittery jewels I’ve ever met. They’re just so smart and motivated and creative. Their brains are complex and capable of insane generosity. I love them. I can’t really emphasize this enough: I wasted so much of my life not making space for real friendships with women (for a lot of reasons). I wasn’t expecting to find true friends where I found them, but I did. I’m so lucky to know them. Everyone I know talks about raising our children together and how we long for it. It’s deep in my bones, this feeling of wanting to raise my children in a village (whatever that looks like).

Look at these beauties.

I did another thing on Lopez. On the last day, I woke up early and took a hike by myself out to the end of the island.

Fern and I are involved in a scouts group that’s really tremendous and beautiful. It’s consuming a lot of my time and my thoughts, but it’s inspiring and endlessly engaging. It’s for all genders, everyone, no religion, just about the outdoors and service to your fellow humans.

If you’re an adult in scouts, you go through a program too, though it’s all up to you how much you actually do. I’m really into it. One of the things I did at Lopez was called a Vigil, where you take a bit of time to you ask yourself a bunch of questions about your own path through the scouts program and how you fit.

I chose Lopez for my Vigil for two reasons: One, it was the first time I’d taken any kind of vacation away from my children. It was special because I got to do it with my favorite friends who are all in similar situations with their young children. We “did the thing.”And Two, the San Juan Islands played a huge role in my life as a young camper and later as an Environmental Educator. My journey in environmental and outdoor education started about 20 years ago at an OMSI camp on Orcas Island. It changed my life forever. It’s the work I’m supposed to do. I had to take time away from that work when I had my children, but it’s always been what’s in my guts. Finding this scouts group was kind of an epiphany for me in that I can still do this work and have a family, and there’s a place for them in it too.

Even further, my friends are so supportive of it. They’ve trusted me to take their children into my scouts group and they know it’s going to be fine. One night we were talking about scouts and one of my friends said that they finally got what I’d been talking about all these years, about  what I do and how I take kids out to the forest. She said she could see that it’s what I’m supposed to do. It was so deeply meaningful to hear that, as I don’t talk about it a lot but it’s coursing through my veins at all times. To hear that I’ve been able to convey this part of me was really something wonderful.

After a weekend of being with my friends on this island, in this dense forest and rolling farmland, I had to leave the night before everyone else. I got to the ferry and rode back to land, and said goodbye.

I made these cards to teach my scouts about the 10 Essentials. I always have them pack their own backpack for a meeting with 10 things THEY think are important to bring. Then we go through them with these cards, comparing what we’ve brought or what we’ve forgotten. My favorite part is the extra stuff they bring, even if it’s heavy. Books, stuffed animals, etc. 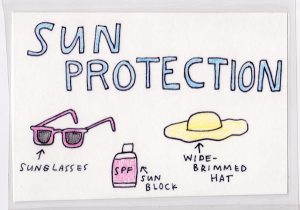 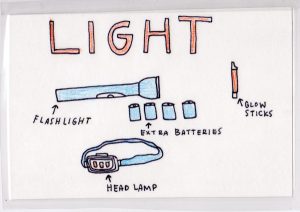 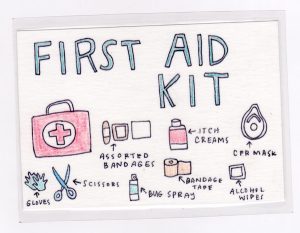 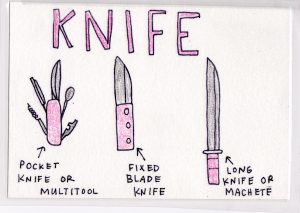 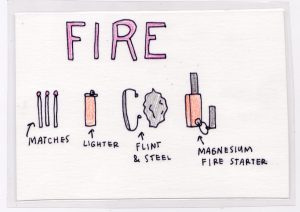 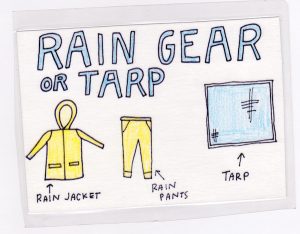 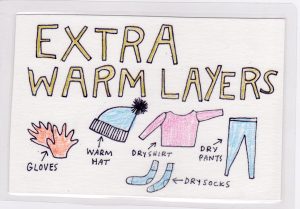 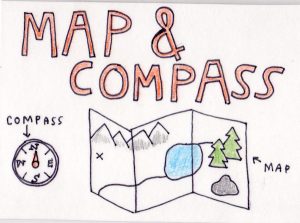 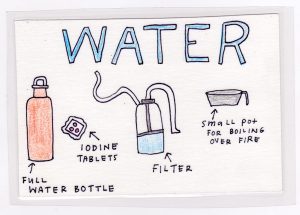